Music is a family business
It’s not uncommon for musicians to pass on their talents and passion for their work to the next generation, and while we can’t always be sure whether it’s the forces of nature or nurture at work, throughout modern music history there have been plenty of celebrated musicians whose children have tried to forge their own path to musical success.
‍
Some have given their parents quite the run for their money - an obvious example might be Enrique Iglesias, the King of Latin Pop. In fact, Enrique was so determined to become successful on his own terms that he pursued a music career under a pseudonym at first, using the name ‘Enrique Martínez’, because he wanted to be able to take credit for his own musical success rather than having people assume that his father Julio had smoothed his path towards musical domination.

But Julio and Enrique Iglesias are not the only Latin pop stars with a family connection that you can get to know through Lirica. This week we’re introducing you to another musical family powerhouse who are always hitting the headlines in the Spanish speaking world...
Meet the Montaner family
One of the hottest Latin music families right now is the Venezuelan Montaner family. 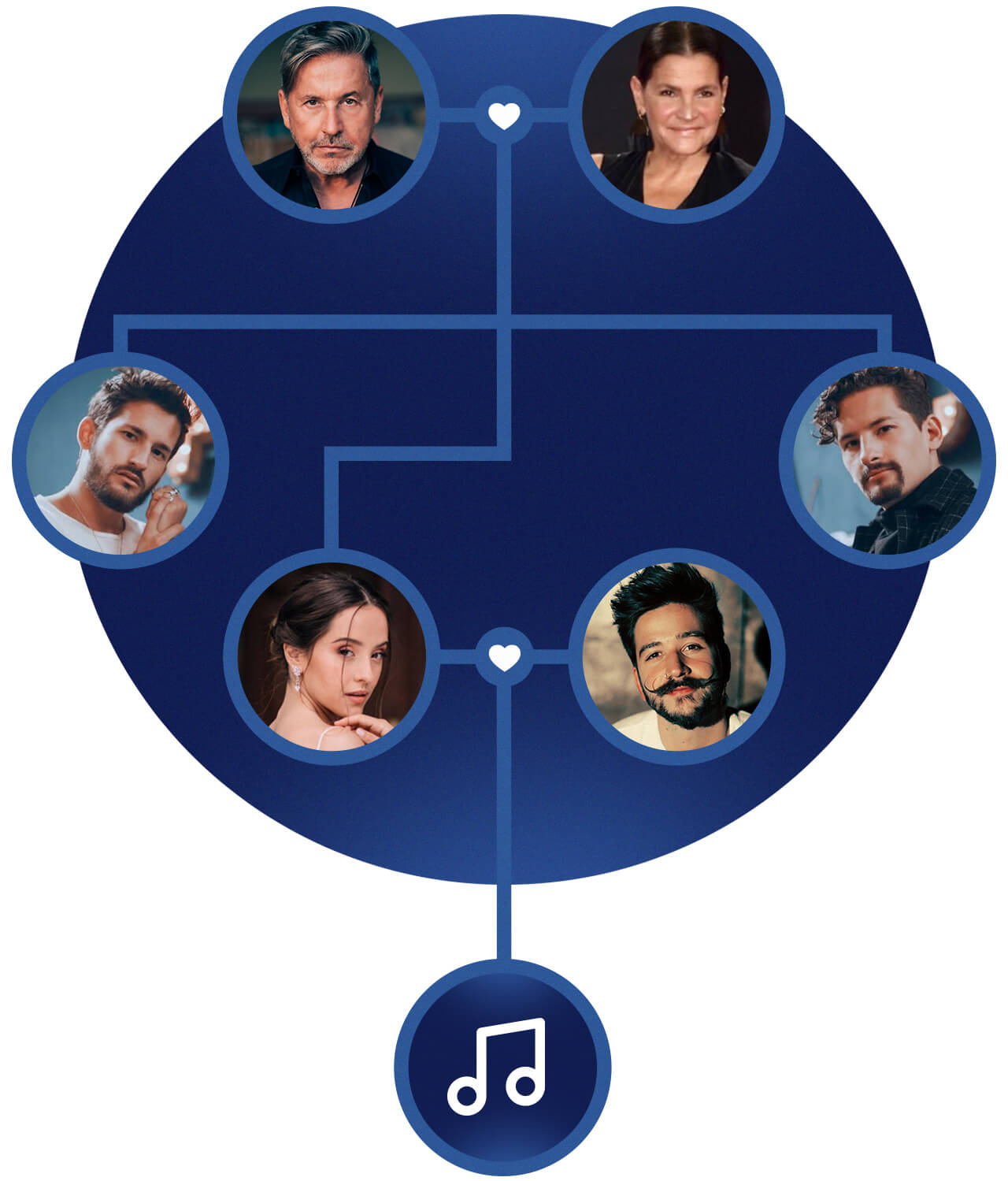 Did you know you can meet all the musical members of the Montaner family right here on Lirica App? Here’s a short introduction to each one and the songs in which they appear...

Camilo Echeverry (Tutu)
Camilo married Evaluna Montaner in 2020, making him the newest member of the family. Born in Montería, Colombia, Camilo came onto the Latin pop scene in 2007 after winning Colombian talent show Factor XS. In 2015 he moved to Miami, Florida, where he penned hits for other singers, e.g. Sin pijama by Becky G and Natti Natasha. He re-launched his own solo career in 2018, revealing a new bohemian look and trademark handlebar mustache, which you can check out in the music video for his song Tutu.

Evaluna Montaner (Favorito)
Evaluna Montaner is married to Camilo. Originally born in Caracas, Venezuela, she has established her own successful career as an actress, singer and music director. The couple met in 2015 in Bogotá, when they were both chosen to host an event. Camilo proposed in 2018 and they even turned the footage from their wedding in 2020 into a music video for their song Por primera vez. You can hear Evaluna’s sweet voice on that song, and you can also get to know her better in the video for Camilo’s song Favorito, which the couple filmed together on their honeymoon (luna de miel) in French Polynesia.

Ricardo Montaner (Por primera vez)
Evaluna’s singing career was launched in 2012 when her father, Argentine-Venezuelan singer-songwriter Ricardo Montaner, invited her to sing alongside him on his song La gloria de Dios. He also appears in the music video for Por primera vez, walking Evaluna down the aisle. He has experimented with different musical styles over the years and he’s well known for his philanthropic work for UNICEF as a Goodwill Ambassador for children. His music career began in the 1970s and he has released more than 24 albums and sold around 22 million records worldwide - no pressure, kids!

Mau y Ricky (La boca / Ya tú me conoces)
Evaluna’s brothers, Mauricio and Ricardo are also successful musicians who perform as the duo Mau y Ricky. Their style ventures more into reggaetón territory and, like Camilo, they have written a string of hits for other singers such as Chayanne, Thalía and Leslie Grace. They are based in Miami and in 2019 they were the only Latin artists to be chosen by Youtube Music for their “Artist on the Rise” showcase. They frequently collaborate with other artists and you can listen to their songs Ya tú me conoces (with Thalía) and La boca (with Camilo) on Lirica. They also make a guest appearance on the song Qué tienes tú alongside Dvicio and Reik.

LESSON
Tattoo
This week we have created a new Intermediate song lesson for Camilo’s latest sizzling hit, Tattoo. This song was released in July 2020 and so far the official video has clocked up almost 400 million views on YouTube. This collaboration with Puerto Rican artist Rauw Alejandro has been playing on Spanish and Latin radio stations all summer and we guarantee it’s going to put you in a good mood. If you watch the video closely, you might also be able to spot Evaluna in the background...

In this lesson, you will learn how to use por and para to express cause and purpose respectively and you’ll also pick up some useful phrases which are used in everyday conversational Spanish.